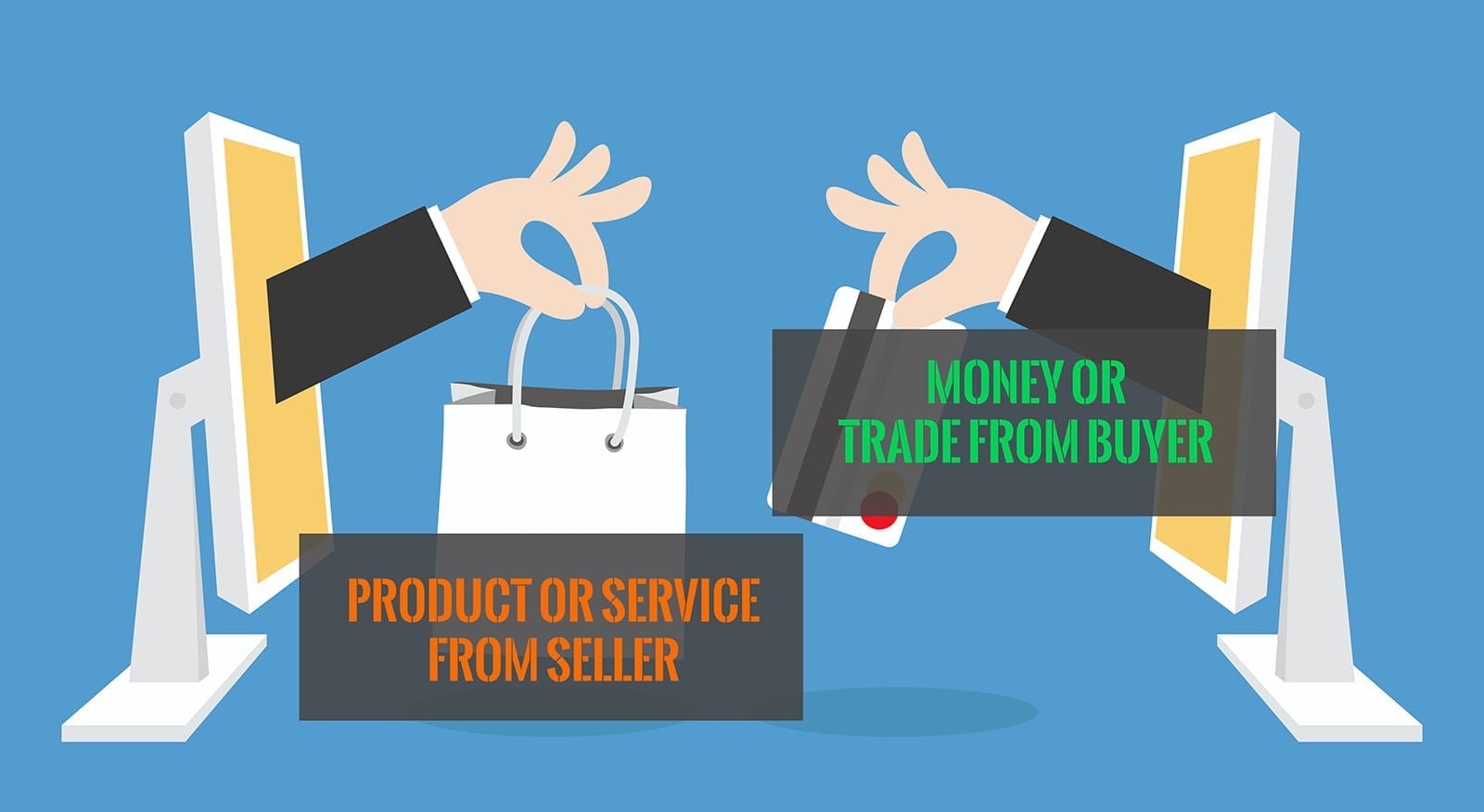 Tony Robbins, Bob Proctor, and before them, Napoleon Hill – all motivational rock stars – consistently drill into their audiences that NOTHING becomes a reality until or after it’s first a thought.

Another variation on this idea is:

Both those expressions can seem or sound trite. Yet, if you really, truly, consider what they’re trying to say… wow.

There is LITERALLY (yes, this is one proper time for the word ‘literally’) nothing that ever exists – ever – that did not begin with a thought. And nothing can exist, if it is not imagined in the mind of someone first.

Commerce is the practice of exchanging something of value for something else of value, usually at a large scale. At its most legitimate, the value exchange in commerce is roughly-equal in the minds of the parties involved.

Most often, we think of this exchange as:

Product or Service from Seller –> Buyer for “Money” (or equal trade)

But is that it? Is that all there is to commerce?

Today, there is another type of commerce that is growing rapidly. You can see it everywhere. People write about it, chat about it and interact with it. It can be free or command massively huge prices. It’s often shared widely and develops “tribes” of raving fans and loyalists more easily than anything we’ve seen in a very long time. In fact, it grows almost rabidly—and for sure, virally. The internet is its playpen, incubator and playground.  But it crosses over well into the “real world” too.

What is this little magical mystery tour of opportunity?

As a CMO, general business and marketing strategy are big parts of my job—internally and for clients.

Recently, I began to notice that I kept fumbling through a too-freaking-long explanation to get across the idea of commoditizing thought—either for “selling” expertise, information and ideas as a revenue source OR “buying” it (such as when purchasing “exposure” or hiring media “influencers”).

In some cases, I was suggesting engagement in the “selling” of thought, ideas, and information tangibly and intangibly, to launch a business—to build authority and establish expertise. Other times, it was to add an additional revenue stream or source of income. And there were other reasons too. But in all, the primary goal was to set it up so that this exchange could happen at a more massive scale than a typical small to mid-size business might be participating in as a general practice.

Similarly, I also found I was encouraging some clients to “purchase thought.” For example, by paying influencers to help market their primary products or services or hiring thought leaders as coaches or to develop specific parts of a company’s operations, marketing, etc.

One day I was yet-once-again mega-struggling to define what I was coming to feel was a complicated, abstract, concept during a strategy call. I was getting flustered.

And. Then. It. Just. Popped. Out. “You know,” I said as if it was something I’d been saying for years…

I instantly coined this type of value exchange (yes, I have looked and surprisingly, it is NOT yet coined anywhere else), “Thought commerce™.”

Thought commerce™ is the buying and selling of “thought”—ideas, knowledge, expertise, advice and entertainment designed, delivered and sold as a commodity. (trademark applied for)

WOW! Was it really that simple? Instantly, the points I was trying to make were clear—without even layering on further definition!

The next day, I introduced thought commerce™ to two mentors, a former boss, and three members of my marketing mastermind group. I asked them if they understood what it meant—without my providing further explanation?

All. Six. Got. It. Instantly. No long, elaboration needed.

Now, to be fair, I realize that the concept of “thought” as a product or service isn’t entirely new.  I mean, we’ve long bought and sold books and education, seminars and courses, right? Sure, we have. That’s nothing novel.

On the other hand, the internet has transformed “regular” commerce in ways we never could have imagined years ago, but that we accept as natural and normal today. Furthermore, it has helped turned “ideas” and “thought” into “things” and it has compressed time and space. This has help create an environment ripe for the “value” associated with thought to skyrocket.

Yet, looking back to when I was struggling with the explanation for what I was suggesting and considering that definition now, in the framework of “Thought Commerce™,” some things I started to realize were:

Thus, the idea of thought commerce™ isn’t really a radical diversion from traditional commerce – and it isn’t something 100% original. Instead, it’s a new hybrid creature that is a synthesis of the ability and capability to assign a value to thought, the availability and opportunity to disseminate it on a mass scale, and the viability and scalability of both those things to support a mass-marketed revenue model.

Here are specific 3 characteristics that help differentiate thought commerce™ from the mere selling of “information”:

Have you caught yourself thinking while reading this, how you or your business could commoditize thought? Or Ideas? Or even concepts?

In today’s modern world – with our “Internet of Things”, AI-driven-everything, and digital anything-you-can-think-of, I only expect the value of thought to skyrocket even more than we’ve already seen. If you have not explored or even considered thought commerce™ as a potential revenue source, you’re already likely a little behind. Time to catch up.